Power from the sea

Floating off the Conamara Coast looking west on Galway Bay

Just eleven miles east of the Read-out offices is a winking presence bobbing on the waves of Galway Bay a little distance from the shore. This article from Eugene Doogan of Wavebob tells us what’s its doing and how they keep tabs on what is happening out there. 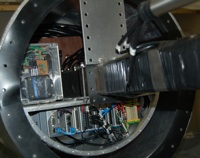 The Solution:
Rapidly creating a highly integrated, rugged system for real-time control and data acquisition for a WEC prototype using NI LabVIEW, Compact FieldPoint, and CompactRIO.
” In particular, the versatility, speed, and simplicity of coding in LabVIEW, as well as excellent diagnostic and debugging tools, made it an obvious choice.”

Wave Energy
Since 1999, Wavebob Ltd, one of the world’s leading wave energy technology companies, has been developing a prototype WEC for deployment in offshore “wave farms” that are similar to wind farms. Our goal is to develop a commercial WEC that can produce significant electrical power for the onshore grid on coastlines with a suitable wave climate.

Invented by Irish physicist William Dick, the Wavebob WEC is a unique dual-body point absorber in which the two bodies move relative to ocean waves and to each other. The two bodies are coupled by hydraulic cylinder pumps, which are used to extract power from the relative motion. This part of the WEC is known as the power takeoff (PTO).

WEC development involves trials at different scales: at small-scale in-wave generating tanks (one one-hundredth to one-tenth) and then a larger scale (one-fifth to one-half) with fully operating PTO systems. The development team administers trials with the small-scale WECs in a sink, bath, or pond. When all trials are complete and successful, the team builds a full-scale WEC prototype.

To control the PTO in extreme sea conditions while maintaining efficient power extraction, the WEC requires a rugged and sophisticated control system. In addition, each stage of product development has its own requirements for the data acquisition and supervisory control system, which changes throughout the development cycle.

Hardware and Software Selection
The WEC prototype trials aim to successfully demonstrate the Wavebob WEC technology and gather data, which would inform the design of a full-scale Wavebob WEC.

A control and data acquisition system for the trials required real-time control of hydraulic valve switching according to sensor input, as well as data acquisition from a variety of sensors at appropriate sample rates. The requirements are similar to those of many industrial controller applications, but also include the unique challenges inherent to operating in varying sea conditions. These include operating in a marine environment, consequent dynamic effects on equipment, operation from DC source (24 VDC batteries with charging systems), the need for deterministic control (real-time OS), and relatively high-channel-count data acquisition and digital I/O.

After extensive research into the various options on the market, LabVIEW graphical design software was a natural fit for the PTO control system. In particular, the versatility, speed, and simplicity of coding in LabVIEW, as well as excellent diagnostic and debugging tools, made it an obvious choice. In addition, the range of hardware available from NI and its seamless integration with LabVIEW offered real benefits to the project.

The team selected LabVIEW coupled with Compact FieldPoint and CompactRIO for the control and data acquisition system to achieve the following benefits:

Control and Acquisition System – WB 06-07
During the first two trial phases for the Wavebob WEC, the team used Compact FieldPoint with LabVIEW and LabVIEW Real-Time. While the system performed extremely well, both the complexity of the control requirements and channel count increased in the subsequent development phase (MK3). As a result, the limits of the test system were approached on the second prototype. The MK3 prototype would require more processor power and faster acquisition rates.

MK3 Prototype
The scale of the WEC prototype in this phase of development, also known as the MK3 prototype, is a quarter of full scale with a fully operable PTO. Given the increasing complexity of control and additional sensors, the team selected CompactRIO hardware, LabVIEW, LabVIEW Real-Time, and the LabVIEW FPGA Module. In addition, they constructed a one-seventeenth scale model for rapid trials of structural and other changes. We had to build the new control and acquisition system into this model for data acquisition.

We selected CompactRIO for its integration with LabVIEW as well as its processing power and acquisition rates. The hardware offers the ability to run control and data acquisition loops at much faster sample rates without compromising the timing integrity of the system due to processor overload. All control and I/O functions can be programmed on the field-programmable gate array (FPGA) in the CompactRIO backplane and can run simultaneously. The controller only has to read the resulting data when logging. The small footprint and low power consumption of the CompactRIO system also facilitated incorporation into the one-seventeenth scale model.

Just as in the previous prototypes, LabVIEW was the ideal choice due to its tight integration with the selected hardware. The graphical programming language is easy to use, versatile, has a myriad of modules and tools available (including the ability to target a real-time embedded OS), and very good support.

This entry was posted on Thursday, April 22nd, 2010 at 8:22 am and is filed under Green Issues. You can follow any responses to this entry through the RSS 2.0 feed. You can leave a response, or trackback from your own site.