Energy-efficient production means more than just the use of variable-speed drives and efficient motors with low energy consumption. The question going forward is how to selectively place complete production lines or portions thereof into an energy saving mode during unproductive times.

It has long been a matter of course in every notebook computer that the hard drive, screen, or notebook as a whole will be placed in standby mode, depending on the operating situation. This function is a device feature and only requires parameter assignment. This is exactly the approach taken in the PROFIenergy concept, in which standardized control commands are used to place devices and machines into energy saving mode via PROFINET.

In 2009 the PI (PROFIBUS & PROFINET International) began work on developing the basic technology of PROFIenergy – the communication profile for operating energy-efficient production plants.

The specification was finished in record time, and the first PROFIenergy devices reached the market in 2010. Since then companies have indicated a strong demand for PROFIenergy products.

PROFIenergy enables use of smart energy management over existing network infrastructures in production. However, the actual energy savings that can be achieved depends primarily on how equipment manufacturers and operators implement the opportunities provided by the technology into their equipment and operating concepts. This requires knowledge of the technical and economical tradeoffs between energy consumption and equipment operating modes.

Since up to now only limited empirical data and hardly any actual data have been available on the relationship between energy consumption and equipment operating modes, a detailed measurement study was needed to provide actual quantitative data and analyses that would support the now-familiar qualitative assertions. The Institute for Automation & Industrial IT (GoogleTranslated!), Cologne University of Applied Sciences, was commissioned to perform this study. The institute is a member of the PI Working Group that developed the PROFIenergy specification and also serves as a PROFINET Competence Center, among other things. It specializes in PROFINET diagnostics and in performing energy consumption measurements and analyses for production plants.

The goal of the PROFIenergy study is to show the user benefits that will result from using PROFIenergy. These include both the direct benefits associated with improved energy efficiency (electric, pneumatic, thermal energy) as well as the indirect benefits, e.g., resulting from extended service life of operating equipment.

The main tasks of the study include:

To achieve representative results, the study included applications and industry sectors in which PROFINET is used and benefits from PROFIenergy are particularly relevant.

Typical measuring setup of PROFIenergy study in a production plant

Initial analyses and measurements for the PROFIenergy study have been completed on production lines in Germany at Daimler’s Sindelfingen plant and at Volkswagen Commercial Vehicles in Hanover (Panamera production). The behavior of the overall plants and their components were analyzed with respect to load curve, load distribution, and pauses. In addition, the influence of operating modes on energy consumption was analyzed, and pauses were analyzed with respect to frequency and duration.

The measurements conducted in October 2010 involved long-term recordings on production equipment in order to capture both planned pauses and idle times as well as unplanned pauses and to determine their relevance. The power measurements were taken at up to 15 different measuring points within a plant. As a result, it was possible to record typical load curves and determine characteristic values at different levels, ranging from the main incoming supply down to individual consumers.

Line-side analyzers capable of simultaneous measurement and recording of values were used to measure the power and all characteristic values of the supply system, including voltage, harmonics, and phase offsets. Up to 15 measuring devices were used in parallel for the long-term recordings. Continuous recordings of voltage, current, and power parameters were made over a 7-day period at 1 second measurement intervals. At the same time, synchronous data on equipment status and operating mode were acquired from PLC log data. The synchronization of the measuring devices and the PLC ensured that the measured values at the individual measuring points could be attributed explicitly for subsequent analysis.

Example of the recording of operating mode (PLC signal, top) and load curve (bottom) for a robot system in a production plant

Based on these measurements it was possible to perform a detailed analysis of operating modes and the related energy consumption of plant units. This analysis covered the following points: 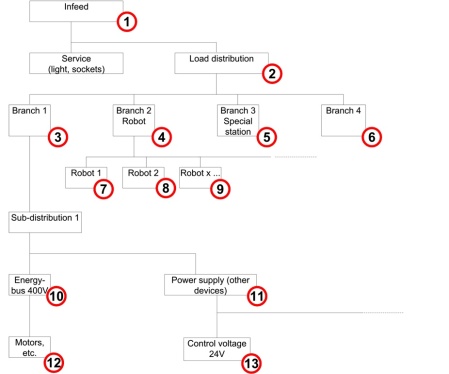 Typical arrangement of measuring points in a production plant

The load curves in the analyzed production plants typically exhibit regularly recurring load profiles that are the direct result of the discrete production steps occurring in production plants. Yet, not all production equipment is active at every point in time. The load curves therefore have typical profiles that are the result of chronological overlapping of individual devices and plant components. However, due to material stores in the infeed or between plant units, there are often no rigid process sequences. The load profiles can thus vary – particularly during the transition to a temporary equipment standstill, in which not all plant components are necessarily affected at the same time (due to run-on, idling of certain stations, additional filling of intermediate stores, etc.).

A noticeable feature of the load curves in the analyzed production plants is the high load peaks, which can be seen in the example measurement results in below, which were obtained over 24 hours in a typical plant segment. While the load level during operation is around 80 kW, the base load is only around 17 kW. At first glance, this does not seem particularly relevant to the search for potential savings by reducing energy consumption during idle times. After all, the base load appears to be less than 20% of the upper load level – a misinterpretation that is easy to make. Here, however, one must not allow the high peak load to conceal the fact that the actual consumption value (that is, what is actually paid for) is the mean value of the load profile, which in this example is around 32 kW.  The base load during a standstill is thus more than 50% of the energy consumption during productive operation and provides significant opportunity for savings if handled appropriately.

In addition to this relative evaluation, attention must also be paid to the order of magnitude of the energy consumption range.

Load distribution and energy flow within the plants

An important aspect of the study was the analysis of the load distribution within the different plants. Due to the structured distribution of the measuring points – extending from the incoming supply to the terminal level – it was possible to analyze the energy consumers separately and to identify their typical characteristics during production and idle times

On the other hand, controllers typically account for 2-3% of the overall energy demand.

Idle times occur for different reasons (planned, unplanned, operational, model-related) and provide important clues to the operating behavior of a plant. Brief standstills are often an indicator of opportunities for optimization with respect to equipment synchronization and/or the material store; longer standstills occur during planned pauses and planned shutdowns and when problems occur.

Based on the results of the study, not only planned but also unplanned idle times are relevant for the use of PROFIenergy. Special attention was therefore given to analyzing the duration of the idle period. The idle times were classified according to their duration, and the cumulative duration of all the individual events was calculated (total time of all standstills occurring in one class) to produce the analysis of idle times shown in Figure xx.

Idle times of short duration occur relatively frequently, but are typically not candidates for switchover to energy saving mode because of the time required to restart the equipment from standby mode.

Based on previous estimations, it can be assumed that for many plant components, a transition to energy saving modes is appropriate for idle times lasting 5 minutes or more. If this approach is taken, one can conclude for the plant example in Figure 7 that 64% of the cumulative idle times last more than 5 minutes and thus offer significant potential for the use of PROFIenergy.

An even more pronounced result can be seen in the curve for another plant example in Figure 8 in which the relevant portion of the exploitable idle times accounts for 90% of the cumulative idle times. 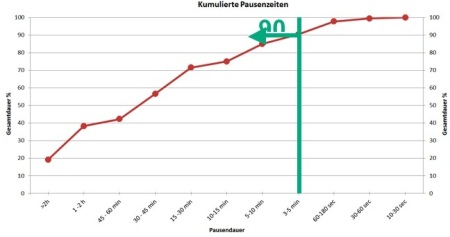 The potential for energy and cost savings

Most of today’s production plants have only a ‘hard switch’ on/off option.

Experience dictates that problems will occur when restarting switched-off equipment. Out of fear of startup problems, operators often do not switch off production equipment even during extended standstills, e.g., overnight and on weekends. These planned idle times account for a significant portion of the operating hours, depending on the shift model. Unplanned idle times contribute even further to this. Based on the results of the study, it can be assumed for typical automotive production plants engaged in body construction and assembly that a production plant with 2-shift operation will consume about half (47%) of its total energy consumption during idle times. Only 53% of the energy consumption is used for productive operation.

As a result, the use of PROFIenergy offers significant potential for savings. It must be noted, however, that all of the energy consumed during idle times cannot be saved. For one thing, the PROFIenergy concept does not switch-off equipment completely but rather places it in an energy-saving mode; this mode can differ depending on the equipment component. In addition, it only makes use of idle times of sufficient duration.

Based on the previous results, it can be assumed that the use of PROFIenergy can save approximately 70% of the energy during exploitable idle times. The result is a savings of 33% of the total energy consumption of a plant.

• Half of the total energy consumption occurs during idle times

The new opportunities made possible by PROFIenergy will change how plants are operated, assuming that these opportunities are considered during plant engineering, i.e., during development of plants and plant concepts.

PROFIenergy is both the basis for and the driver behind this development work.

To fully exploit the savings potential, the use of PROFIenergy-capable control components alone is not enough. In addition, changes to plant concepts are needed to enable devices or plant units to be placed selectively in energy-saving modes. In so doing, there must not be any impairment of safety-related functions in standby mode for safety-related applications.

For machine and plant manufacturers, this opens up new opportunities for gaining a competitive advantage. But this will only be the case, if purchase decisions for new equipment take into account energy consumption costs in addition to investment costs. Plant owners must clearly define their requirements to plant manufacturers so that PROFIenergy can be included in the design plans for equipment from the outset.

To optimize these potential savings, however, corresponding plant concepts are required, for example, to allow plant units to be selectively placed in energy-saving mode and, if necessary, to be switched off selectively.

This entry was posted on Thursday, July 14th, 2011 at 2:53 pm and is filed under Automation, Research, Training/Education. You can follow any responses to this entry through the RSS 2.0 feed. You can leave a response, or trackback from your own site.