Thoughts of an automation thought leader stimulated by the events at the Fukushima nuclear power station in the wake of the tsunami in 2011.

Bela Lipták is one of those people who may without doubt be called an automation leader such as mentioned in Nick Denbow’s recent article, “Who are the Automation Thought Leaders?“ 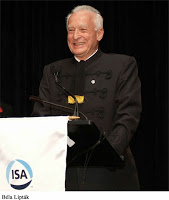 Lipták, a patriotic Hungarian by birth, has done much to pass on his considerable knowledge to the next generation of automation professionals. He is a worthy recipient of the ISA’s Life Achievement Award  for his history of dedication to the instrumentation, systems, and automation community as evidenced by his teachings, writings, and inventions. He has published over 200 technical articles and has written 34 technical books, including four editions of the multi-volume Instrument Engineer’s Handbook.

He has published a series of articles through the years on the role of automation and more specifically how its correct application might have have prevented some of the sometimes fatal and always catastrophic nuclear disasters that have occurred down the years. Events such as that at Three Mile Island (USA) in 1979 or in Chernobyl (Former USSR) in 1986.

Of course the most recent such incident is the Fukushima Power Station irrepairably damaged after the major earthquake and subsequent tsunami in North East Japan. All these studies have been published in Control Global, or its sister publication and normally we would just put a link on our news pages (and indeed may have in some cases at the time of publication). This time we are using this method because he has published several articles at different times continuing his thoughts on this major and still alarming disaster.

The Fukushima Nuclear Accident – Part 1 (15/4/2011) Béla Lipták talks about the safety processes used at the plant.

Preventing Nuclear Accidents by Automation – Part 2 (5/7/2011) Bela Liptak here discusses the design and control errors at Fukushima, because they still exist in many american boiling-water reactors (BWR) and must be corrected.

How Automation Can Prevent Nuclear Accidents-Part 3 (31/8/2011) Watch out for outdated and/or unreliable instruments. These can cause major disasters.

In Automation Could Have Saved Fukushima (Part 1), (15/3/2013) Liptak says that if the Fukushima level detectors had operated correctly, the hydrogen explosions would have been prevented.

Automation Could Have Prevented Fukushima, (Part 2) (30/4/2013) discusses automatic vs. manual operation of the emergency cooling systems, and the roles the bad designs of control and block valves played in this nuclear accident.

He promises some further articles and we hope to put links here to those as they appear.

This entry was posted on Monday, August 26th, 2013 at 7:00 am and is filed under Applications, Automation, Instrumentation, Safety. You can follow any responses to this entry through the RSS 2.0 feed. You can leave a response, or trackback from your own site.