STERISAFE-Pro is a disinfection robot from the Danish company INFUSER. It disinfects surfaces in any given room – for example patient rooms, operating theatres or hotel rooms – removing up to 99,9999% of pathogens. The robot fills the designated room with an Ozone-based biocide agent which kills unwanted bacteria, viruses and fungi, while purifying the air from small particulate matter in the air. STERISAFE-Pro is controlled from outside the room using wireless technology from HMS Industrial Networks. 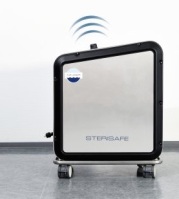 The unit produces Ozone (O3) by using the oxygen (O2) already present in the room. All that is needed is electricity and water. By diffusing Ozone and a fine mist of water, it is possible to expose all surfaces in a room. The Ozone oxidizes the membrane or shell of bacteria, viruses and fungi, leading to total deactivation of these micro-organisms.

The Ozone-saturated atmosphere in the room is sustained for a defined period of time, during which the pathogenic micro-organisms are killed on surfaces and in the air. Ozone naturally turns back to Oxygen after having reacted with pathogens and other pollutants, leaving no chemical residue.

Robust wireless access needed
Although ozone is a naturally occurring gas, it is harmful at high concentration levels and the STERISAFE-Pro requires that the operator is outside the sealed room while the robot runs its cycle. The operator uses a tablet which is connected wirelessly to the PLC inside the robot. INFUSER has created an app which the operator uses to control the robot. The app interfaces with the built-in webserver in the PLC.

OK, so that sounds easy enough, but accessing a PLC which is inside a hermetically sealed, stainless steel machine which performs surface disinfection, demanded a wireless solution with high performance.

“When we first started developing STERISAFE-Pro, we used a regular commercial access point, but we soon realized that we needed something more robust and advanced,” says Thomas Clapper, production responsible at INFUSER.

“We needed an access point that was omni-radiant and also 100% sealed. This is when we came across the Anybus Wireless Bolt from HMS Industrial Networks.”

The Anybus Wireless Bolt™ is a wireless access point for on-machine mounting. It can communicate via WLAN or Bluetooth up to 100 meters and is built for harsh industrial conditions both when it comes to the physical housing and the wireless communication.

It was a perfect fit for STERISAFE.
“We use WLAN to communicate between the PLC inside the robot and the tablet and really benefit from the robust communication that the Wireless Bolt offers. We also needed to design unique connections for each robot/tablet-pair, so that it is possible to run several machines in the same area without radio interference. This is also something that the Anybus Wireless Bolt allowed us to do.”

Tough demands
But the project has not been without challenges. One issue that INFUSER ran into was that Ozone sets tough demands on durability. Although the Wireless Bolt is IP67-classed (meaning that it is waterproof down to 1 meter’s depth), INFUSER still found that the rubber washer on the Bolt was not Ozone proof.

But since the Anybus Wireless Bolt is mounted in a standard M50 hole, it was easy to find a replacement – a washer that HMS now can offer as an alternative to their offering too.

This entry was posted on Tuesday, October 31st, 2017 at 10:34 am and is filed under Technology, Wireless. You can follow any responses to this entry through the RSS 2.0 feed. You can leave a response, or trackback from your own site.