One of the most important challenges, when designing monitoring facilities in remote locations, is resilience. Remote tide gauge systems operate in extremely harsh environments and require robust communications systems that almost never fail and are capable of storing large amounts of data locally as an extra protection for data. Scientists from the National Oceanography Centre (NOC) are therefore upgrading the South Atlantic Tide Gauge Network (SATGN) to include the latest low power dataloggers with built-in satellite telemetry capability – the SatLink 3 from OTT Hydromet. 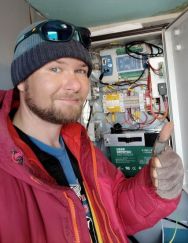 The SATGN is maintained and operated by the National Oceanography Centre, which is the British centre of excellence for sea level monitoring, coastal flood forecasting and the analysis of sea levels. It is the focus for marine water level research in Britain and for the provision of advice for policy makers, planners and coastal engineers.

Satellite telemetry is becoming increasingly popular in many other parts of the world. “Some government and non-commercial organisations are able to utilise a variety of satellites free of charge,” explains OTT’s Nigel Grimsley. “However, the cost of transmitting data via satellite has reduced considerably recently, and now rivals the cost of cellular communications.”

The SATGN measures sea levels in some of the most remote places on Earth. Monitoring sites include Antarctic locations such as Rothera and Vernadsky; located around 1,400km below the southern tip of Argentina. Prior to the installation of this network there was a lack of information on sea level variations in the Southern Atlantic and a bias in tide gauge records towards the more densely populated Northern hemisphere. Over the last 30 years data from the SATGN have improved estimates of global sea level change, such as those reported by the Intergovernmental Panel on Climate Change.

The NOC at Liverpool operates and maintains the SATGN providing near real-time sea level data for operational purposes and scientific research. This has helped to provide a long-term sea level record that is used by British scientists and the wider scientific community to monitor the Antarctic Circumpolar Current (ACC) variability. The data is also being used to help in the ‘ground truthing’ of satellite altimetry as well as the evaluation of climate variability on various timescales including longer term changes. In addition, the data is being used by local communities to provide essential information for both government and port authorities.

As part of this NOC ongoing program, the tide gauges’ main datalogger and transmitter have been upgraded to incorporate OTT’s new Sutron SatLink3. The first site to receive this upgrade was the Vernadsky station located in Antarctica, which is now operated by Ukrainian scientists and is soon to be followed by the tide gauge at King Edward point, on the South Georgia islands.

A further advantage of the upgrade is the SatLink3’s ability to communicate via Wi-Fi with wireless devices, including smart phones, tablets and computers. This means that local staff can connect wirelessly to the logger from a few metres away, which is a major advantage during inclement weather conditions. 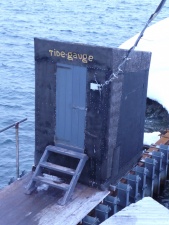 The network is using the Geostationary Operational Environmental Satellite (GOES) to transmit data. GOES is operated by the United States’ National Oceanic and Atmospheric Administration (NOAA)’s National Environmental Satellite, Data, and Information Service. One minute averaged data is transmitted every 15 minutes. The data is then made freely available on the IOC Sea Level Station Monitoring Facility web site.

Summary
By upgrading to the SatLink3 logger/transmitter, the NOC is enhancing the resilience of the South Atlantic Tide Gauge Network. Jeff Pugh from the Marine Physics and Ocean Climate Group at the NOC, says: “The data from this network informs models that assist with projections relating to climate change, and others which provide advance warnings that can help protect life and property. Given the remote locations of the monitoring sites, it is vitally important, therefore, that the instruments are extremely reliable, operating on low power, with very little requirement for service or spares. By transmitting almost live data via satellite, these monitoring systems enable the models to deliver timely warnings; advance notice of tsunami, for example, can be of critical importance.”

This entry was posted on Tuesday, July 14th, 2020 at 9:10 am and is filed under Applications, Climate Change, Green Issues, Measurement, Sensors. You can follow any responses to this entry through the RSS 2.0 feed. You can leave a response, or trackback from your own site.