Aerospace, medical and automotive engineers will be able to speak with Harmonic Drive AG to improve the accuracy and efficiency of their applications at this year’s SPS IPC Drives show in Nuremberg (D). Harmonic Drive AG will be launching its FHA-C Mini Servo Actuators with Absolute MZE encoder at stand 119 in hall four, from November 28-30, 2017.

The exhibition brings together suppliers of electric automation technologies from all over the world to discuss the future of automation and new innovative products. Visitors will have the chance to eat sushi while talking to Harmonic Drive AG engineers about its range of servo actuators and learn how its multi-turn absolute motor feedback system can increase productivity.

With a multi-turn absolute encoder mounted directly on to the motor shaft, the actuator can provide accurate signals for positioning directly at the load. This is ideal for design engineers working in the medical and automation sector, where creating accurate and reliable devices is imperative.

“Automation provides a number of opportunities for businesses to improve the efficiency of their processes,” explained Graham Mackrell, managing director of Harmonic Drive UK. “Harmonic Drive FHA Mini Servo Actuators have been created so that they can be combined with the YukonDrive® Servo Controller. When connected, the actuator can be tailored for use in demanding dynamic applications.

“In addition to being customisable, the actuators feature a multi-turn absolute motor feedback system that acquires the absolute position directly at the load, with maximum accuracy over more than 600 revolutions. The productivity of the servo actuator is increased because unproductive referencing is no longer required, allowing it to deliver smooth and quiet running characteristics.”

• The SPS IPC Drives show brought together 63,291 people at last year’s event, with over 500 exhibitors coming from countries outside of Germany.

SPS/IPC/Drives is perhaps the automation exhibition of the year since Interkama was swallowed up by the even larger though more general engineering show of Hannover Meße in the Spring.

This year’s event was no disappointment as 56,000 visitors thronged twelve halls exhibiting the goods and services of nearly 1500 enterprises. As we have come to expect of German exhibitions this was a truly international affair with around 400 of the exhibitors and 20% of the visitors were from outside the Federal Republic of Germany.

Tweets eminating from the Nuremberg site were a multilingual selection demonstrating this cultural cross fertilisation. Using the #SPS12 we had excited texts in European and Asian languages some which we could follow and others left us in the dark due to our ignorance rather than what was actually said. Here are some gems we gleaned from the hundreds coming thick and fast from the show floor.

Factory automation and network technology in Nuremberg (IE Book 29/11/2012)
All IE Book pictures are collected on their Facebook Page.
Industry highlight closes with a plus (Automation Fair 30/11/2012)

ASM’s Saudi tweeter said “Don’t mess #sps12 the biggest Industrial Automation Show in Europe – #ASM is there…”  Sick Deutschland had us puzzled at first with “Twittering sensors at sps ipc drives!…” Among the most prolific tweeters was Leo Ploner of IE Book tweeting useful ideas and pictures throughout including  a useful tweet on where visitors could go after the show! His picture, reproduced above with a panoramic view of one of the halls was one of the best of this show giving a fair impression of the atmosphere there! We include a link to his report on the event in the box at the right.

In inevitably a lot of the tweets were of the style “Will you be at SPS IPC Drives this week? We will! Come and say hello at stand Nr….” This showed how twitter is being used and the excitement it can generate  “Olaf ist begeistert von der Twitterwall auf #SPS12 bei @SICK_de. ” (Olaf is enthused by the twitterwall). And this from SPS Italia, “SPS IPC Drives Italia team in arrivo a Norimberga pronto per#SPS12. Ci trovi al pad…” (SPS/IPC/Drives Italia hold their own show in Parma next May) “Wir wünschen allen Besuchern und Ausstellern eine spannende und erfolgreiche Messe!” and the like greeting in English, “A warm welcome at our booth to this year’s #sps12 in Nuremberg: We’re looking forward to seeing you!” “¡Buenos días desde la #sps12! Todas las soluciones para la producción y el desarrollo de producto en nuestro stand,” “The world of automation and robotics is gathering in Germany these days at #sps12.”

One tweet gave a breakdown on tweets and their impact on the first day: “Analytics for sps exhibition hashtag #sps12: 33,306 impressions reaching 16,329 accounts  at the rate of 50 tweets per hour.”

“Eaton gets ready for a busy first day!”

Then there were those who offered prizes like the ubiquitous iPad, the Samsung Tablet “a guided tour of the European Space Centre” (from DellOEM) or smartphones! Mem invited “Come by for your bier koozie!” we’re not quite sure what a ‘bier koozie’ is but we imagine that it is pleasurable!

The final day at the event saw a snowfall. “I hear it’s a snowy morning at #SPS12. Warm up with a fresh cup of coffee atDELLOem stand!” “hallo (sic) Winter!”

All in all it appears to have been a very successful exhibition. The exhibitiuon organisers stated as the show closed “The atmosphere in the exhibition halls was dominated by a distinctive working atmosphere and intensive talks on the exhibitions booths. For the further economic development in 2013, the automation industry takes positive impulses from the exhibition.” This is scheduled for 26-28 November 2013. They have also published a series various exhibits on videos  youTube.

We missed (again) the biggest automation event of the year in Nuremberg (D) this year. There are only so many things one can do and with the proliferation of user group or company sponsored events in the final four months of the year it is difficult to spread the limited resources – both fiscal and physical – to cover everything. That is why we try to use the social media resources to cover so many of these events. 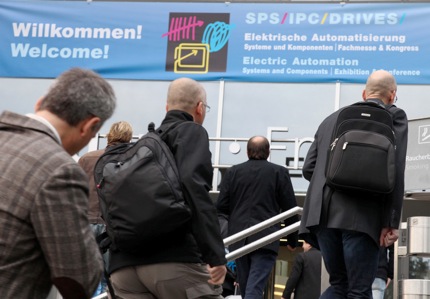 An unbroken rush of visitors!

The SPS/IPC/Drives has been consistant in delivering a very useful and practical showcase for the European and Global automation market for many years. This year was no exception.

52,028 trade visitors poured into  Nuremberg and chose this exhibition as their highlight of the year for the electric automation industry. During the three days of the show the industry showed its condensed ability and its optimism which it will use to profit from the positive economic situation. Indeed the boyancy of the show belied the gloom and doom of the mass media predictions of the economic state of Europe. Especially the increase in visitors  from abroad was significant. 10,147 (+34%) came to inform themselves about the offers of 1,323 exhibitors.

Last year we reported on this show too – Major show in the heart of Europe – and this year topped it in size with nine halls full of automation and having to fight your way through the crowds to see what you wanted to see.

One of the most complete reports is from Leo Poner’s Industrial Ethernet Book in their SPS/IPC/DRIVES 2010 Show Report published on 7th December 2010. They report that the shopw emphasised green issues and security.

Carl Henning, the ever-active ProfiBus US guy, put two contemporaneous reports on their stand on his ProfiBlog.  Both offer a pictorial guide to the stand entitled “Technologies in the PI Booth” and the next one “Welcome to the PI booth” They are good pen pictures support with generous pictures and videos of what one stand’s experience was. He also alludes to the US automation journals who sacrificed time so close to their beloved Thanksgiving festival to report on this event.

He may have another report. This and some of their reports will appear below appear below, newest at the top.

Automation World’s Gary Mintchell’s Mintchell Report comments in living colour on his way home from the show on key trends and new products from Siemens and Beckhoff are highlighted. He also has a few pictures on his Flikr page: SPS-Drives Trade Fair Nuremberg.

into another new year…

The current issue of Read-out is the first of 2010, the last year of the first decade of the 21st century! Distributed free to nearly 2400 named automation professionals throughout Ireland and to some subscriptions abroad it is without doubt Ireland’s leading source of information on the industry.

The latest on FDI!

Ireland has had its share of buffeting in the current economic woes that the global economy is suffering. After almost 15 years of unprecedented growth Ireland, and its Celtic Tiger,  hit the wall at the end of 2008 and great indeed was the fall. Irregular goings-on in the banking sector did nothing to soften the fall and the harsh measures needed to cope with the downturn included general reduction in salaries not to mention severe job losses. These mostly occurred in the construction industry and so have not, by and large effected the process industry though it did effect some manufacturing with some famous names falling by the wayside.

This issue of Read-out highlights  Emerson Process Management’s solution to the paradoxical problem of more complex technology and the shortage of experienced personnel that Signpost readers learned of in our item Conquering Complexity. Also highlighted on the front page was the new series of wireless devices marketed by Douglas Control and Automation and manufactured by Stahl. There was however  a certain emphasis on pressure measuring instruments in the products highlighted in that section of the publication.

An article in the InsideFront series discusses a paper from the ARC Advisory Group on Fieldbus Foundation technology as a business value proposition. This paper was unveiled at the recent SPS/IPC/Drives Exhibition in Nueremberg (D).

As might be expected there is an item on the changes in the International Society of Automation including the early build-up to the new Automation Week and the appointment of a new editor at their magazine InTech.

In late November and early December, Ireland suffered unprecedented rainfall which lead to extensive flooding over large swathes of countryside. Read-out highlights how local supplier MeasureIT provided a round the clock service especially with the Tideflex check valves, 20 years in Ireland in 2009, which did in fact help in some areas which were prone to flood and which escaped this time.

Usually there are some books recommended in each issue of Read-out and this issue is no exception. Included are George Buckbee’s book on “Mastering Split-Rang Control” and Professor Gerald Cockrell’s on Practical Project Management.

In company news the big organisational changes in ABB are reported with details of the heads of the various divisions.

This issue concludes as usual with People News, people and events which occurred in the past few months.
The next issue of Read-out (Feb/March 2010) will be highlighting Calibration, Test & Measurement!